Anybody remember – or still have — the 1972 Topps Billy Cowan card? To celebrate the 70th anniversary of Topps baseball cards, mlb.com asked readers/fans to send in their favorites, and one of the submissions recently highlighted was the ’72 Cowan. It shows the Calhoun City native posed in a batting stance with the iconic Big A at the California Angels’ stadium looming in the background. The halo that circles the A lurks just above Cowan’s head. It’s artsy and kinda cool. 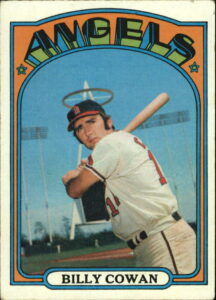 Other submissions of local significance: a 1974 Topps Dave Parker from the Grenada native’s early days with Pittsburgh and a 2003 Topps Cliff Lee, a rookie card of the Meridian Community College product when he came up with Cleveland. If you like baseball, you have to like baseball cards, especially old ones. Personal favorite: 1965 Topps Willie Mays. First year of collecting. Great player. Regal pose. Great card design. Can still smell the bubble gum.

Jarrod Saltalamacchia’s 14-letter surname was the longest in MLB history. He also had a few distinguishing moments on the field. “Salty” was Atlanta’s No. 1 prospect when he arrived in Double-A Mississippi in 2006, and though the switch-hitting catcher didn’t really live up to that heady billing, he did play parts of 12 seasons in the majors and won a World Series ring. He announced his retirement on Monday. He batted .232 with 110 home runs and 381 RBIs for seven different clubs. He hit 25 homers for Boston in 2012 and drove in 65 runs for the Red Sox the next year, helping them win the championship. With the M-Braves in 2006, Saltalamacchia batted .230 with nine homers. He returned in 2007 and hit .302 with six bombs in 22 games before being called to the big leagues. … Former M-Braves star Ronald Acuna, the 2018 National League rookie of the year with the Braves, was selected in a fan vote to appear on card No. 1 in Topps’ 2019 basic set. Other recent recipients of this honor include Mike Trout, Aaron Judge and Kris Bryant, each of whom was on the ballot for 2019, along with Mookie Betts and Bryce Harper. Acuna, who homered in his first at-bat for the M-Braves in 2017, was honored with a Bobblehead Night at Trustmark Park last summer. … Twenty-four of the 40 players on Atlanta’s current roster are M-Braves alums, and 10 of the 20 non-roster invitees to spring camp played in Pearl the last couple years. Former DeSoto Central standout Austin Riley – one of eight Top 100 prospects (by mlb.com) in Atlanta’s system – received a non-roster invite for the second straight year. He spent parts of 2017 and ’18 in Pearl.

Topps Baseball 2018 Series 2 Card No. 383. That card is not likely to be a hot commodity among big-time collectors, but any Mississippi baseball aficionado will get a charge out of seeing it. It’s a JaCoby Jones base card – but there’s a bonus. The card features an action shot of Jones, the young Detroit Tigers outfielder from Richton, as he rounds third base in an apparent home run trot. He is about to get a low-5 hand-slap from the Tigers’ third-base coach, Dave Clark, the former Shannon High slugger. Two Magnolia State prep legends on one card. Jones was Mr. Baseball in the state in 2010 before going off to LSU. He was a third-round draft pick by Pittsburgh in 2013 and debuted in the majors with the Tigers in 2016. Way back in 1980, Clark set a state record for homers with 23 at Shannon. He went on star at Jackson State and was drafted 11th overall by Cleveland in 1983. He played 13 seasons in the majors, batting .264 with 62 homers and earning a reputation as one of the game’s top pinch hitters in his heyday. He is in his fifth season as a Detroit coach. P.S. Jones, aka “Juicy J,” is currently on an injury rehab assignment at Triple-A Toledo. He is batting .204 with eight homers this season for the Tigers.

There’s only one way to celebrate National Baseball Card Day: Tear open a pack of Topps cards. The anticipation of the big reveal makes you feel like a kid again. Every time. You remember when you got that Richie Allen rookie card that nobody else had. So there you go, hoping for, say, a Cody Bellinger or an Aaron Judge or a Ronald Acuna. Instead you pull out a Miguel Rojas, a Kolten Wong and a Melvin Upton Jr. It happens. There’s also a card of James Loney in the uniform of the Texas Rangers, a team he never officially played for, and a reprint of a 1989 Bill Schroeder. Oh well, there will always be another pack — and the wonderful anticipation that comes with it. P.S. Watch for it: Boston-New York at Yankee Stadium, today. Ex-Ole Miss star Drew Pomeranz (11-4, 3.36 ERA) will pitch for the Red Sox against Luis Severino in Game 2 of the latest huge series between these ancient rivals. The Yankees won an electric Game 1 on Friday night. … Perfect Game All-American Classic at San Diego’s Petco Park, Sunday. Hattiesburg’s Joe Gray and Brandon’s J.T. Ginn will participate in this high school showcase to be televised by MLB Network at 3 p.m. (Both also played in the Under Armour All-America Game at Wrigley Field.) Gray, an Ole Miss commit, is one of the six finalists for Perfect Game’s Jackie Robinson Award, which goes to the organization’s national player of the year. Gray batted .477 with seven homers and 19 steals for Hattiesburg this past season.

The Washington Nationals have rid themselves of the mercurial Jonathan Papelbon, giving the ex-Mississippi State star his unconditional release on Saturday. Saturday also happened to be National Baseball Card Day. So, of course, when you rip open a pack of 2016 Topps Series 1 to celebrate this special day, you get a … Jonathan Papelbon. Then you open a 2016 Bowman pack and you get a … Mark Melancon, the ex-Pittsburgh closer who displaced Papelbon in Washington. Is that ironic or coincidental or a little bit of both? Also pulled from the same 36-card pack that included the Papelbon: Mitch Moreland, Seth Smith, Chris Coghlan, Kendall Graveman, Jeff Francoeur and Blaine Boyer, local connections all. In a pack of Topps Series 2, there’s a Martin Prado and Luis Avilan and a 100 Years of Wrigley Field commemorative card featuring Rafael Palmeiro’s big league debut (Sept. 8, 1986). In the afore-mentioned Bowman pack, there’s a JaCoby Jones, the former Richton High star now in Triple-A in Detroit’s system. Scattered throughout these packs are other cards of note. A Corey Seager rookie here, a Kyle Seager there. A Jose Bautista bat flip card here, a Rougned Odor there. Current stars such as Madison Bumgarner, Anthony Rizzo, Yoenis Cespedes and Adam Duvall, and future stars (maybe) like Gary Sanchez, A.J. Reed, Brendan Rodgers and Phil Bickford. (Alas, no Dansby Swanson or Ozzie Albies.) Among the so-called inserts, there was a Manny Machado, Cal Ripken, Ken Griffey Jr., Ichiro Suzuki and a reprint of a 1991 Frank Thomas (very cool card). All in all, quite a haul. P.S. So what does Papelbon do next? He wants to keep playing, for sure, and among the teams that are rumored to be interested is the Boston Red Sox, his original club. Do they dare go there?